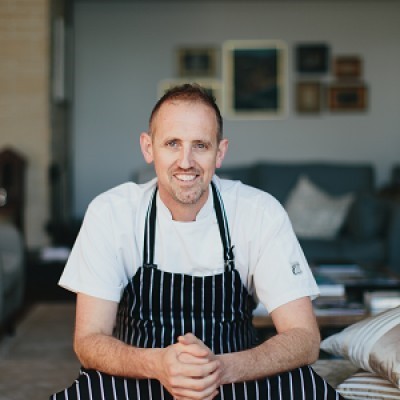 The force behind The Long Apron Restaurant and Cooking School, and Spicers Clovelly Estate luxury retreat, Cameron is acknowledged as a leading figure in the dynamic local food industry, gaining a host of awards and invitations to present at a number of internationally recognized food events while utilizing his profile to support many special charities.

Cameron also shares his valuable time and experience by mentoring the Executive Chefs at all Spicers Retreats who in 2015 have accumulated the dining accolades of ‘7 Hats’. His individual flair and innovation are an integral part of his ever evolving, intriguing and original take on fine dining which is sometimes playful and quirky but always skilful and thought provoking; a style largely self-taught that delivers a menu of local seasonal produce created by a passion for his craft.

Cameron Matthews has held the positions of Executive Chef de Cuisine of Brisbane’s iconic Siggi’s Restaurant, and Executive Chef of Restaurant Lurleen’s, Sirromet Winery, Mount Cotton – which received the honour of being voted both ‘Best Tourism Restaurant’ and ‘Best Winery Restaurant in Australia’ by the Restaurant and Catering Association under his leadership. For three years, he held the position of Head Chef at the ‘Two Hatted’ Regional Victorian Restaurant Simone’s of Bright; the place where only three years earlier, he completed his apprenticeship.

In 2009 Cameron became the Executive Chef of The Long Apron Restaurant and Cooking School. For 5 years, The Long Apron has retained its ‘Two Hats’ in the Brisbane Times Good Food Guides, from 2012 to 2016, and in 2012 it was awarded ‘Queensland Regional Restaurant of the Year’.

A similar scenario applies to the Australian Good Food and Travel Guide where The Long Apron has retained its ‘Two Hats’ for the past 4 years. The restaurant was inducted into the Queensland Hotels association Hall of Fame for ‘Best Prestige Restaurant’ in 2014 after topping the category for 4 years in a row.

The Long Apron was laundered as one of’ Gourmet Traveller’s Top 100 Australian Restaurants’ (#79) gaining ‘One Star’ and it also ranked in Fiona Donnelly’s Top 10 Dishes. Amongst a slew of regional and state awards and numerous other accolades The Long Apron was also recognised by the Australian Newspapers in their ‘Hot 50’ restaurants for 2014. Cameron was a national finalist in Country Style Magazine’s 2013 ‘Country Chef of the Year’, and was awarded “Employee of the Year” at the Sunshine Coast Business Achiever awards 2013.

He has presented on numerous occasions at the Noosa International Food and Wine Festival, demonstrated his innovative style at Regional Flavours, South Bank Brisbane and recently presented at the Port Douglas Food Festival. Cameron is a dedicated supporter and contributor to numerous charities including ‘Starlight 5 Chefs 2014’ and ‘Variety 10 chefs 2015’ charity dinners where, he generously donates his time and talents.

Locally, Cameron is a strong supporter and advocate of the Hinterland region’s iconic celebrations – The Sunshine Coast Real Food Festival, The QLD Flower and Garden Expo and The Ginger Flower and Food Festivals. Cameron has made numerous guest appearances on TV including the 7 Network’s Weekend Sunrise, and has also featured on the lifestyle programs, ‘Mercurios Menus’, ‘Coxy’s Big Break’, ‘The Great South East’ and ‘Qld Weekender’.

His legendary cooking classes have been mentioned on Channel Nine’s Morning Show as one of ‘Australian Traveller Magazine’s Top Five Cooking Classes in Australia’ and he has demonstrated on NINE’s Today Show highlighting the Sunshine Coast’s superb and diverse regional produce. Cameron regularly features in print media and on radio.

Cameron, his wife and three young children love life in the Sunshine Coast Hinterland – a ‘a delicious slice of heaven’