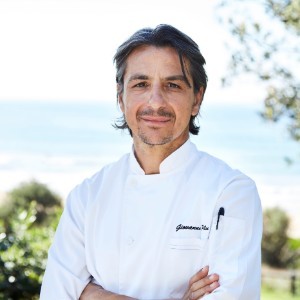 Giovanni began his culinary career in Italy and was always destined to cook. He was born in Sardinia and arrived in Australia in 1992, aged 20 and full of enthusiasm and passion for the unique flavours of his homeland. At his restaurant, Pilu at Freshwater, Giovanni uses authentic products imported from Sardinia together with fresh local produce to prepare a menu that is refined and innovative whilst maintaining the strict traditions of his distinctive region.  He believes Sardinian cooking should involve simple ingredients, prepared with minimum fuss, allowing the full flavour of the ingredients to speak for themselves.

Giovanni is the Executive Chef and owner of Pilu at Freshwater which was recognised in the Sydney Morning Herald Good Food Guide as ‘Best New Restaurant’ in its first year of opening and has received two chef’s hats every year since then.

Giovanni and a group of like-minded Sydney Italian restaurateurs have established the Council of Italian Restaurants in Australia (CIRA) to safeguard Italian culinary culture. Its members are proud of their heritage and are committed to teaching and promoting the values of Italian food in Australia and this year, Giovanni was elected President of the association.  Giovanni is passionate about encouraging young chefs to learn true Italian cooking and enjoys passing on his knowledge to students through cooking classes and TAFE Commercial Cookery courses.

He lists his priorities in life in the order of family, work and bike riding – a sport he keenly pursues and is extremely passionate about.

Giovanni’s first book – A Sardinian Cookbook was released in August 2012.  It was the only Australian cookbook to make the 2013 list of finalists in the prestigious IACP Cookbook Awards, and was successful in winning the People’s Choice Award.

Giovanni is frequently sought out to present his passion and expertise in Italian culture and cooking both in corporate settings and across many media platforms.? He is also very active in the local community and committed to supporting various charities including Sydney Children’s Hospital – Gold Dinner, Starlight Children’s Foundation, Oz Harvest, Freshwater Surf Lifesaving Club, and Bear Cottage.