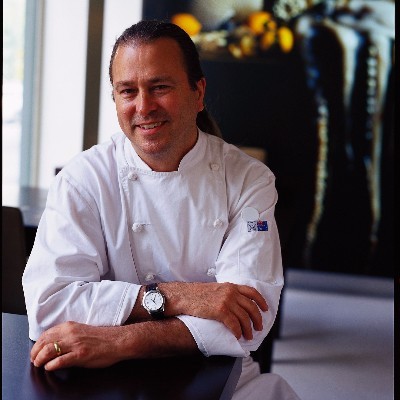 Neil Perry AM is Australia’s leading and most influential chef.

Perry also heads a team of eight consultants to Qantas, developing quarterly menus for First and Business travellers, overseeing the implementation and introduction to catering centres at key ports. Since 1997, Perry’s Rockpool Consulting team has played a pro-active role in the entire menu development process, from designing the dishes, to writing and testing the recipes, training chefs in ports all over the world and communicating to and training the cabin crew who cook and deliver the food on board. In 2010, Rockpool Consulting’s work with Qantas expanded to include the set up and implementation of domestic Business Class menus and a stronger focus on the Qantas First and Chairman’s Lounges.

Perry is also author of nine cookbooks - Good Food, The Food I Love, Rockpool, Simply Asian, Balance & Harmony, Rockpool Bar & Grill, Easy Weekends, Simply Good Food and Spice Temple - a television presenter with regular appearances as a judge/mentor on Restaurant Revolution and MasterChef Australia and his own show on The Lifestyle Channel, and has his own range of Omega kitchen appliances. He also has a weekly food column in Good Weekend in the Sydney Morning Herald and The Age and contributes a monthly food column to Qantas: The Australian Way magazine and Good Food.

Perry’s career in hospitality began at Sails restaurant at McMahons Point and in Rose Bay. He then became head chef at Barrenjoey Restaurant, Palm Beach and was also given creative control over Perry’s in Paddington. In October 1986, he opened the Blue Water Grill at Bondi Beach and took the site from a 20-year failure to an overnight success. He then opened Rockpool in February 1989 with his business partner Trish Richards, which has just celebrated its 25th birthday and is still regarded as a world-class restaurant and one of Sydney’s best.

This year, Perry’s seven restaurants have been awarded a combined total of 15 Hats in the Good Food Guide titles in Sydney, Melbourne and Perth and all are featured in Gourmet Traveller’s Top 100 List, with Rockpool est. 1989 awarded ‘Restaurant of the Year’. Influential Wine Spectator Magazine has also acknowledged the Rockpool Group’s restaurants for their extraordinary wine programs, awarding Rockpool Bar & Grill Sydney a ‘Grand Award’ for the fifth consecutive year, while Rockpool on George, Rockpool Bar & Grill Melbourne and Perth and Rosetta all received a ‘Best of Award of Excellence’, and Spice Temple Sydney and Melbourne received an ‘Award of Excellence’.

Through Perry’s involvement in the Starlight Children’s Foundation and various other charities, he was appointed a Member of the Order of Australia in 2013 for ‘significant service to the community as a benefactor of and a fundraiser for charities, and as a chef and restaurateur’. He has also established the Rockpool Foundation, a charitable arm of his business ventures, which strives to support initiatives that strengthen communities and promote real social change. Perry’s passion and the importance he places on quality are evident in all his dishes, the business projects he undertakes, the charities he supports and the success his restaurants enjoy.