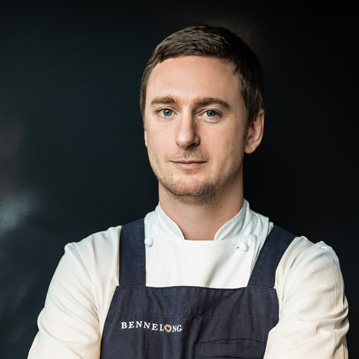 Robert Cockerill is the Head Chef at Bennelong.

The 37 year old was born in Sydney but spent part of his childhood years living abroad with his family in France and the UK before returning to Australia to complete his schooling. During high school, Rob’s parents bought a small farm in Mudgee, turning it into a working olive grove, which produced high quality extra virgin olive oil. It was during this time that Rob gained a true understanding of the concept of seasons. Following high school, Rob moved to Newcastle where he began his chef’s apprenticeship at a local cafe. He then went on to study viticulture at Sydney University.

After a stint in early 2000 working in hatted Sydney restaurants, Rob went to Far North Queensland where he worked closely with fisherman learning the art of spear-fishing and finding a connection to the water and environment; a passion of his to this day.

Rob was then approached by the Soho House Group in London. From there Rob spent several years in London working across the restaurant group. It was during his time in London that Rob had heard what Peter Gilmore was doing in Australia at Quay. He was drawn to Chef Gilmore’s food philosophy and approach to produce, something that mirrored his own.

Upon his return home to Sydney in 2008, Rob approached Quay and was hired to work under Executive Chef Gilmore. It was during his 7 years at Quay that Rob was able to immerse himself in the innovative cuisine of Chef Gilmore and work closely alongside him in building invaluable relationships with Quay producers - the Australian farmers, fishermen and growers whose produce is the centrepiece of Chef Gilmore’s cuisine.

In July 2015, Robert Cockerill was announced as the Head Chef at the newly reopened Bennelong at The Sydney Opera House, again working alongside Executive Chef Peter Gilmore to deliver the very best Australian produce within a uniquely Australian space. Rob Cockerill was nominated for Chef of the Year in the 2020 Good Food Guide Awards.

Bennelong Restaurant proudly holds two chef hats and one chef hat for the Cured & Cultured Counter in the 2020 Good Food Guide. Bennelong was also listed as still hot in the 2019 Weekend Australian Hot 50 and #12 in the 2020 Australian Gourmet Traveller Awards.